The Department of Enlightened Civilization is for the revival of Sanatana Hindu Dharma by preserving Hindu libraries & knowledge centers, facilitating research & training in Yogic sciences & manifestation of powers, running the Nithyanandeshwara Paramashiva Devalayam which follows the Veda-Agama Sampradaya in the most authentic way

The Kailaasa Department of Education consists of the Nithyanandeshwara Paramashiva Devalayas, Nithyananda Jnanalaya, Nithyananda Yogic Sciences as its agencies, which are reviving the traditional Hindu education and preserving its heritage. The Department is also leading innovation & research in the Yogic sciences, to produce Third Eye awakened superconscious beings capable of manifesting superhuman powers and feats, thus paving the way for the next evolution of humans as a species.


CAREERS AT THE DEPARTMENT OF ENLIGHTENED CIVILIZATION 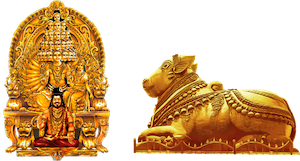