A brahmotsavam is an utsavam or a festival that is organized the Lord Creator Brahma Himself. Brahma being the creator the cosmos, is said to organized such a festival with universal grandour and celebration.

Celebrating Meenakshi and Sundareshwara’s advent, glory, and blessings, is that re-creation. As they manifest happened to save to world from misery and delusion. 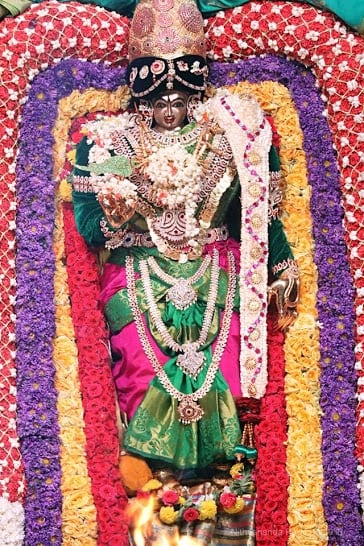 Every year the Cosmos celebrates again and again this grand celestial wedding of Meenakshi and Sundareshwara. We celebrate this grand event in Sri Nithyanandeshwara Paramashiva Devalaya.

Decorated as Meenakshi and Sundareshwara, Lord Nithyanandeshwara and Devi Nithyanandeshwari will mount different vahanas (divine vehicles) and bless the world. During this Brahmotsavam the Pattabhishekam – coronation of Meenakshi, Dig Vijayam – Meenakshi establishing Her supremacy in all the worlds and the Meenakshi Tirukkalyanam will be re-enacted. Re-enacting the leelas – Divine plays – of incarnations is a meditation in the Vedic tradition and elevates our consciousness.

On the first day, the main activity is the “Dhvajarohana,” the hoisting of the flag at the Dhvajastambham. This signifies the commencement of the Brahmotsava. 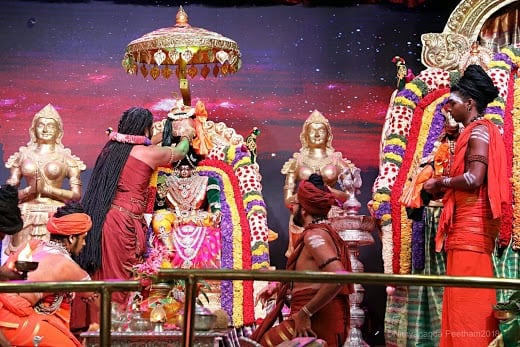 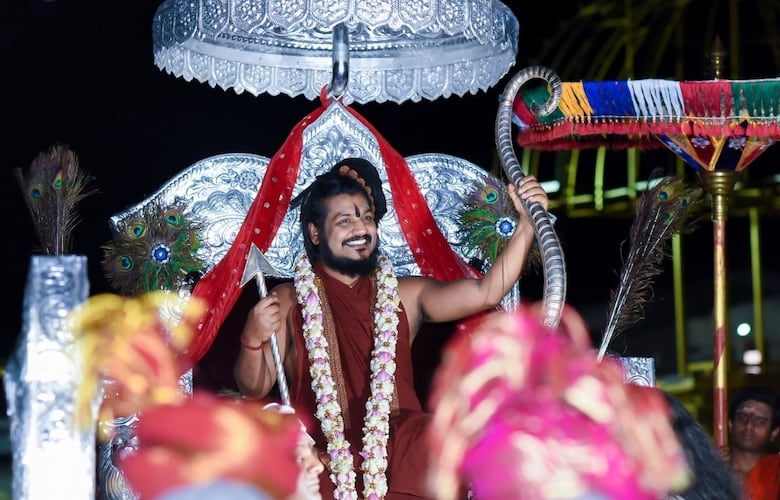 The warrior princess Devi Meenakshi goes on a conquest and conquers the whole world. Upon reaching Kailasa, she falls in love with Lord Paramashiva and realizes her true self. 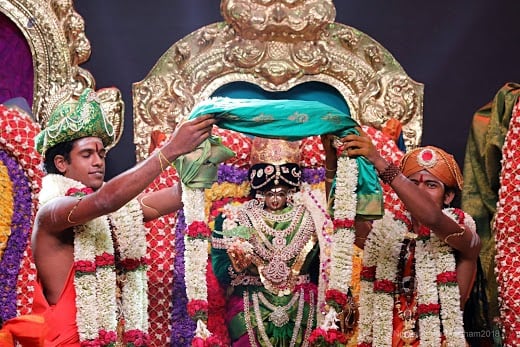 Offer your Worship and Grattitude to Meenakshi and Sundareshwara

Offer your worship to Meenakshi Devi with the Meenakshi Thirukalyanam and recieve the blessings for:

The Story of Meenakshi and Sundareshwara

Devi Meenakshi is an Avatar of Goddess Parvati – the consort of who incarnated in the human body as the daughter of the Pandya king Malayadhvaja and his wife Kanchanamala who ruled the Panya Kingdom from Madurai 2000 years ago.

Earlier in the past life of Kanchamala, she had got a boon from Goddess Parvati to mother the latter. Goddess Parvati’s boon came true when king Malayadhvaja and his wife Kanchamamala performed the Putra Kameshti Yaga – the sacred fire ritual to have progeny. During this Yaga, Goddess Parvati emerged out of the sacred fire as a baby. The baby, to the royal couple’s shock, had three breasts. When they worried about that, at once an Ashariri Vak – a heavenly voice – was heard by them. The divine voice comforted them by telling that the baby is a divine girl and her third breast would vanish once the girl meets her fiancé. The gratified royal couple named the baby as Tadadagai – the one who emerged out of fire.

The girl Tadadagai being the heir to the Royal throne was meticulously trained in all the 64 arts explained in the scriptures. She excelled in each and every field inclusive of the martial arts. During auspicious time, Thadadagai’s Pattabhishekam coronation as the queen of the Pandya kingdom. As a queen when She had to prove Her supremacy, power and courage, She travelled in all the ten directions (inclusive of the Swarga and Patala) and very easily defeated and conquered all the worlds. Finally when she advance towards the Kailash, She effortlessly defeated the Bhutaganas – the army of Lord Shiva. She even defeated the chief of Bhutaganas, the Adhikara Nandi Deva – the divine bull vehicle of Lord Shiva – who stopped Her proceeding further. Her conquering of all the worlds is called the Dig Vijayam. This divine play of Her is called the Dig Vijayam.

Tadadagai finally headed towards Lord Shiva – who appeared as Lord Sundareshwara – with an intention to defeat Him and conquer Kailash, The moment She set Her eyes on Lord Sundareshwara, Her third breast got vanished. Unable to fight further, She bowed Her head down out of blush and realized that He was destined to be Her husband. She surrendered and realised that He is the embodiment of Enlightenment. By realizing this, She fell in love with Him and realized that She was an incarnation of Devi Parvati.

With this realization, the union of Shiva and Shakti happened and She expressed the power to enlighten people just by Her look. From then She was known as Meenakshi – the one with eyes like the eyes of fish. It is said that fish hatch their eggs just by looking at their eggs. Meenakshi came along with Lord Sundareshwara to Madurai and an unprecedented grand wedding ceremony was arranged by king Malayadhvaja. Lord Vishnu who is the brother of Devi Meenakshi was supposed to preside the marriage and give away His sister in marriage to Lord Sundareshwara. But Lord Vishnu from Vaikunta could not make it for the marriage. So the incarnation of Vishnu Pavalakkanivai Perumal from the suburbs of Madurai presided over the marriage and gave Her away in marriage to Lord Siva Himself. This marriage was attended by all the celestial beings and became one of the rarest and very important events of the Cosmos. This celestial marriage is called the Meenakshi Tirukkalayanam. Meenakshi Tirukkalyanam is the expression of the highest principle of the union of Shiva and Shakti.

When Lord Vishnu was coming to Madurai, He heard the news that the marriage of Meenakshi and Sundareshwara is over and so He started returning back to Vaikunta. On His way back to Vaikunta, He entered the river Vaigai which flows in the city of Madurai to liberate a frog and bestowed Enlightenment on it.